One summer evening several years ago while playing fetch with his favorite hexabumpers, German shorthair Scratch (who looks like a cross between a brachiosaurus and a deep-chested Shetland pony) suddenly walked away trying to throw up. He was clearly uncomfortable, couldn’t produce vomit and hunched up as he circled the yard. He looked like he’d swallowed a basketball. And he felt like he’d swallowed a basketball. Even though it had been three hours since he ate, his stomach was bloated and drum hard.

Fortunately, we recognized these symptoms as indicative of gastric bloat and torsion (technically, GDV – gastric dilation and volvulus) because the Ugly Dog Founder, Scrub, had it happen a few years before. We raced Scratch to the truck and drove directly to the emergency veterinary clinic. There, the vet put a tube down Scratch’s throat to where it almost reached his stomach, relieving the gas. We were lucky in that the “torsion” part of bloat and torsion – the twisting of the stomach – was partial and the stomach righted itself, so surgery that night wasn’t needed.

Dogs can bloat without the stomach twisting, but when it does twist, the situation is life-threatening. Blood supply in and out of the stomach is cut off resulting in a severe drop in blood pressure and damage to internal organs. The dog can die within hours.

One thing known about bloat is that it is more likely in deep-chested dogs such as German shorthairs and wirehairs, weimaraners, vizslas, shepherds, setters, boxers, etc. Above all, if a dog bloats and flips its stomach, timing is critical.

When Scrub bloated, we got him to the emergency clinic within an hour, but he had already gone into mild shock. They immediately took him into surgery. Collateral damage from the stomach rotating inside the bloat wasn’t too bad. Scrub’s spleen had to be removed, but apparently spleens aren’t necessary. He lived to 14.5 years-old and never seemed to miss his spleen in the seven years after it was removed. At least if he did, he didn’t mention it. The vet also performed a gastropexy, tacking his stomach to the body wall, preventing the stomach from rotating should he bloat again.

A week after Scratch’s bloat, he had the preventative gastropexy surgery, so if he bloats again, he won’t be at risk of torsion. Following a few precautions, we’ve not seen signs of the basketball since. He hasn’t even asked for a new pair of Nikes or court-side tickets to a Celtics game.

Most vets agree that despite an enormous amount of study, no one knows for sure why bloat and torsion happens. Genetics and body type appear to be factors. “Gassy” (aka “farty”) dogs are also more prone to bloat. Among others, precautions include feeding 2-3 times per day instead of once, withholding water after eating for a while, waiting an hour after exercise before feeding, waiting 1-2 hours after feeding before exercise, and using a bowl like the Brake-fast to slow eating and reduce the intake of excess air.

In life-threatening bloat situations, tubes or needles can be used to relieve the gas, but for us non-medical people, a tube is very difficult to insert and a needle must be positioned carefully in the side to be effective.

If your dog seems to be in pain and has a very tight, distended stomach (with or without trying to vomit), get him or her to a vet as soon as possible. Don’t be afraid of looking silly. We all have had the “should we call the vet” discussion, but a little embarrassment if it turns out nothing’s wrong is a small price to pay given the alternative if it is indeed a case of GDV. 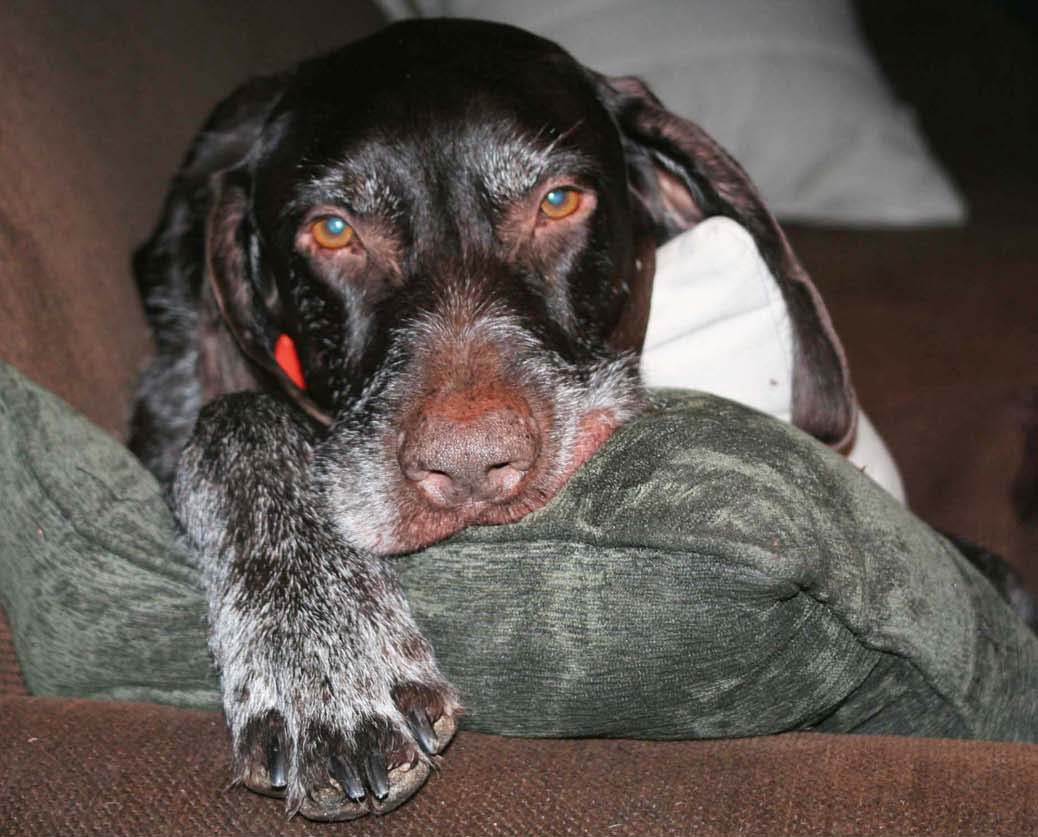